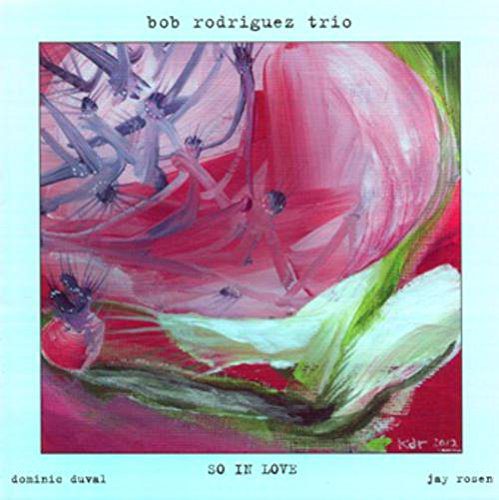 Bob Rodriguez is a jazz pianist of stature. His playing gets a near ultimate showcase with a great trio and the freedom to follow his inner music on So in Love (CIMP 393).

This may not be his first album but it is a kind of model of what he does when given carte blanche permission to soar. With him are 2/3rds of Trio X in Dominic Duval on bass and Jay Rosen on drums, who were working-playing with Bob on a regular basis by the time the album was set down, in 2009.

The simpatico vibes are there; we are the beneficiaries. The trio goes through a well-conceived set of classic jazz vehicles: Freddie Hubbard’s “Intrepid Fox”, Ellington-Strayhorn’s “Isfahan”, Carla Bley’s “Ida Lupino”, Monk’s “Brilliant Corners”, and the like.

Dominic Duval sounds his usual wonderful self. Jay Rosen gets some excellent cooking done here in one of his best recorded performances in such a context (out-bop-freebop).

But the centerpiece that functions to pull it all together is Bob Rodriguez and his immaculately charged pianism. The man gets inside the changes and their implications, the melodic thrust of the tune and breaks out his own very complete vision of his own musical sensibilities, his reaction to the song at hand. Dominic follows closely and has much to say in response. Jay drives the music with the subtle ways and dynamics that make it all hum top-wise.

This is music both in and out, wonderfully forward-moving with continual inventive depth. Listening to the three interact is like appreciating a finely calibrated wooden maze of expertly grafted and beautifully shaped parts–everything meshes and the whole is as near thrilling as are the considerable parts. To listen to how Duval interacts with Rodriguez, how Rodriguez interacts with Rosen, how each part meshes with each is to get a bead on the piano trio in all its glory and its centrality to today’s improvisatory arena.

Hear this one by all means. Bob Rodriguez has arrived.